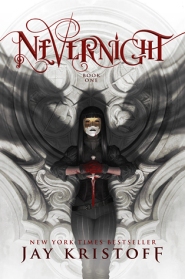 In a land where three suns almost never set, a fledgling killer joins a school of assassins, seeking vengeance against the powers who destroyed her family.

Daughter of an executed traitor, Mia Corvere is barely able to escape her father’s failed rebellion with her life. Alone and friendless, she hides in a city built from the bones of a dead god, hunted by the Senate and her father’s former comrades. But her gift for speaking with the shadows leads her to the door of a retired killer, and a future she never imagined.

Now, Mia is apprenticed to the deadliest flock of assassins in the entire Republic—the Red Church. If she bests her fellow students in contests of steel, poison and the subtle arts, she’ll be inducted among the Blades of the Lady of Blessed Murder, and one step closer to the vengeance she desires. But a killer is loose within the Church’s halls, the bloody secrets of Mia’s past return to haunt her, and a plot to bring down the entire congregation is unfolding in the shadows she so loves.

Will she even survive to initiation, let alone have her revenge?

Prior to reading Nevernight, I had heard much praise for the talents of Jay Kristoff but hadn’t ever had the chance to read any of his books. Now that I’ve remedied that particular problem I can officially say that I want to read all his other books too, just to see if they’re on the same level of awesome as Nevernight! It was SO GOOD. I would describe it as a little bit of Throne of Glass mixed with a little bit of The Lies of Locke Lamora mixed with just a *dash* of revenge. What makes it even better is that it’s not a YA fantasy, so it’s downright brutal!

In a world where three suns burn in the sky and true dark only comes every 2 ½ years, Mia Corvere is out for revenge and the only way she can get it is by joining the Red Church, the most deadly assassins in the world. There she will hone her skills, confront her nightmares, and learn more secrets than she knew existed. The year she spends with the Red Church is fraught with peril.  Each class Mia takes brings such interesting dangers ranging from the possibility of dismemberment to the potential to be captured by the Luminati. Through all of this Mia has to remember her mantra of “Never forgive. Never forget” and that the only friend she has is Mister Kindly, her shadowy not-cat companion.

The overall plot of Nevernight is classic- revenge against those who have committed wrongs/atrocities etc., but that’s really what makes this book so great. There are very few things better than a classic revenge story, especially when it’s so well written. Yeah, we know what the character’s goal is, but it’s not about the goal. It’s about the journey the character takes to get there and in this case we aren’t guaranteed that Mia will achieve her end. She could always fail spectacularly and have a gruesome end, but I don’t think that will be the case. The real jewels in this story are the subplots, all those little plot lines that are both interesting and essential to the main arc of the story. As we progress through this first installment so many questions arise, from who’s murdering acolytes to what a darkin really is. I’m definitely going to leave you hanging about the darkin thing, but trust me it’s SO AWESOME.

This book is so full of lovely little details, tidbits of information, and curiosities. The city of Godsgrave, where we begin, is named after the gargantuan spine and ribs that citizens have carved luxury apartments into. Kristoff gives us his world’s history, theology, and culture. I highly recommend picking this up once it’s released on August 9!!! The book itself is gorgeous and has THREE maps, which is like practically unheard of… okay, okay, so there are other books with an abundance of maps, but you know what I mean. Just read it because otherwise you’ll be missing out on the start of a fantastic new series!