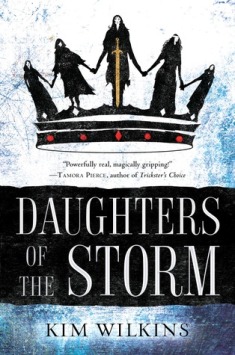 Five very different sisters team up against their stepbrother to save their kingdom in this Norse-flavored fantasy epic–the start of a new series in the tradition of Naomi Novik, Peter V. Brett, and Robin Hobb.

They are the daughters of a king. Though they share the same royal blood, they could not be more different. Bluebell is a proud warrior, stronger than any man and with an ironclad heart to match. Rose’s heart is all too passionate: She is the queen of a neighboring kingdom, who is risking everything for a forbidden love. The twins: vain Ivy, who lives for admiration, and zealous Willow, who lives for the gods. And Ash, who is discovering a dangerous talent for magic that might be a gift–or a curse.

But when their father is stricken by a mysterious ailment, they must come together on a desperate journey to save him and prevent their treacherous stepbrother from seizing the throne. Their mission: find the powerful witch who can cure the king. But to succeed on their quest, they must overcome their differences, and hope that the secrets they hide from one another and the world are never brought to light. Because if this royal family breaks, it could destroy the kingdom.

Daughters of the Storm was a book I’d never heard of prior to being contacted about reviewing it by the publisher. The synopsis was promising – I mean, who doesn’t love the idea of sisters united against an evil stepbrother who’s stolen the throne? Well, that’s technically what this story is about, but it wasn’t as thrilling as I had expected.

This book definitely has some action, but it’s really more of a family drama with swords and kingdoms. The eldest sister and heir to the throne, Bluebell, is fierce, battle hardened, and practical. I liked her quite a bit as she seemed to be the only sister that could keep her wits about her at all times and not be an idiot. Ash was also likable and much less irritating than the others. She’s also a powerful, untrained undermagician who can control the elements. The other sisters are a riot of bad decisions. Rose is wife to the King of a neighboring kingdom and ally, but… let’s just say she thinks with her loins and not her brain. She’s had an affair with the nephew of the king, putting the alliance at risk if it were ever found out and she just can’t make that mistake once. She was definitely my least favorite of the sisters because she’s a prime example of someone who makes selfish decisions and then tries to justify them as love. The twins Ivy and Willow each have their own flaws. Ivy’s a teenage hoe who thinks she’s far smarter and more desirable than she really is. Willow has turned to an unwelcome religion that is contrary to the beliefs of her kinsman, but her biggest flaw is naivety. Their stepbrother is pretty bad, mostly for killing one particular character, but he didn’t seem particularly evil. He just wanted to protect his mother and he wasn’t well loved by his stepsisters.

The whole plot of the story is that their father is dying and the sisters suspect foul play (they’re right) and they need to find someone who can heal him. They sneak off with him so perhaps he can shake the magical enchantment that’s made him fall into unconsciousness and so he’ll be in their safe keeping. The stepbrother knows who did and he’s trying to kill Bluebell before she finds out and kills him. It’s not actually a large scale drama, which I was appreciative of as there are too many “save the entire world” stories out there.

Overall, this book was okay. I didn’t love and it took me a really long time to read it because I just wasn’t super into the storyline or the characters. 3 out of the 5 sisters were irritating and I just didn’t love any of the characters enough to really care about what happened to them. I think I’ll probably hold off on reading future books in this series until I see some redeeming reviews for the sequel.

11 thoughts on “Daughters of the Storm by Kim Wilkins – Review”