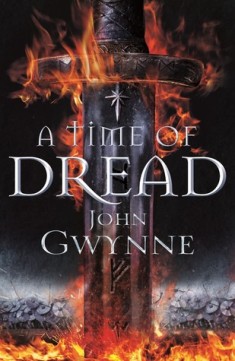 Series: Of Blood and Bone #1

The Ben-Elim, a fierce race of warrior-angels, burst into the Banished Lands over a hundred and thirty years ago. They were in pursuit of their eternal enemy, the Kadoshim demon-horde. On that day a great battle was fought, the Ben-Elim and Kadoshim joined by allies from the races of both men and giants, and a great victory was won.

Now much of the Banished Lands is ruled by the Ben-Elim, who have made this world their home, extending their influence and power as they swallow ancient kingdoms into the protective grasp of their ever-extending borders. But peace is fragile within the realm and the Kadoshim that remain are now amassing on the edges of the empire….

Threats long in the shadows are about to strike.

Once again John Gwynne has managed to capture the imagination and attention of his readers! If anything I may end up liking this series more than his first, though I haven’t quite been able to put my finger on why exactly. I think it’s a combination of things.  If you’re new to Gwynne’s work, I would like to point out that this series is new, but is a continuation of his The Faithful and the Fallen series. I definitely think it can be read and enjoyed without having read the preceding series, but those who’ve read those books also will probably get maximum enjoyment.

A Time of Dread is set over a hundred years after the events of The Faithful and the Fallen series detailing the battle between Corban the Bright Star and the Kadoshim and their dark lord Asroth. We have a largely new cast of characters, though some of the long-lived giants are familiar faces. The new characters are refreshing and they all seem to have really fantastic plot arcs thus far. As a matter of fact, each of the POVs is equally interesting to me which is kind of a rare occurrence! I don’t have strong favorite yet, but I’m definitely thinking that Drem and Riv are going to be really important, especially after the conclusion of this book! Man, that was a stunner!

If you’re looking for some good vs. evil that isn’t entirely clear-cut, plus an entirely satisfying amount action this might just be the book for you. There are bear attacks, twisted hybrid monsters, clearly evil bad guys, not so benevolent good guys, fisticuffs, and sword fights. What more could a girl ask for in a fantasy book? Not much. I think I actually like the plot better in this book – maybe it’s because I love beginnings, but I also like that the evil is already present and that the Ben-Elim aren’t turning out to be as good as they were once portrayed. They’re actually a controlling, big-brother ruling class who insist on imposing their rules on the world for the greater good. Things aren’t all cohesive amongst them though, as we come to find out… chaos makes for some interesting chapters.

A Time of Dread has managed a perfect balance of well-written new and old characters, an engaging plot, and a wonderfully apt title. This is set in a time when people are leaving their homes in hopes of gaining a semblance of freedom, there are unspeakable terrors happening on the very doorstep of those who seek to prevent them, and anyone may be an agent of the Kadoshim. I have high hopes for this series and am greatly looking forward to the sequel.

8 thoughts on “A Time of Dread by John Gwynne – Review”