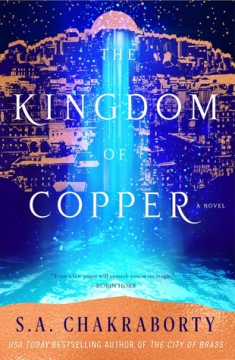 Nahri’s life changed forever the moment she accidentally summoned Dara, a formidable, mysterious djinn, during one of her schemes. Whisked from her home in Cairo, she was thrust into the dazzling royal court of Daevabad—and quickly discovered she would need all her grifter instincts to survive there.

Now, with Daevabad entrenched in the dark aftermath of a devastating battle, Nahri must forge a new path for herself. But even as she embraces her heritage and the power it holds, she knows she’s been trapped in a gilded cage, watched by a king who rules from the throne that once belonged to her family—and one misstep will doom her tribe..

Meanwhile, Ali has been exiled for daring to defy his father. Hunted by assassins, adrift on the unforgiving copper sands of his ancestral land, he is forced to rely on the frightening abilities the marid—the unpredictable water spirits—have gifted him. But in doing so, he threatens to unearth a terrible secret his family has long kept buried.

And as a new century approaches and the djinn gather within Daevabad’s towering brass walls for celebrations, a threat brews unseen in the desolate north. It’s a force that would bring a storm of fire straight to the city’s gates . . . and one that seeks the aid of a warrior trapped between worlds, torn between a violent duty he can never escape and a peace he fears he will never deserve.

So, I’m lame and never reviewed The City of Brass despite LOVING it – it was definitely a 5 star read for me. Long story short, I loved the setting, the characters, and all the interesting relationships which is why I was super excited to get a lovely box of book mail containing Kingdom of Copper!

The story picks up a few years after the events of the first book and it was interesting to see how life had changed. Nahri married Muntadhir as she had bargained and has settled into her role as Nahid. Alizayd was exiled, almost killed, and now resides with one of the desert tribes where he brings much needed water. Dara, well of course he just couldn’t stay dead could he? Nah, he’s helping train some rebels and does the bidding of someone thought many years dead. The book was so full of plotting and drama that it was impossible for a dull moment to exist.

I love the rich setting of Daevabad, the thousand subplots and hidden agendas, and I love the characters most of all. If that isn’t enough for you, there’s some exciting action-y bits scattered in as well! Every time some new morsel of information or reveal was thrown my way, the reading intensified. I actually stayed up late (like really late) reading this one and not for one second regretted the lost sleep. Now I don’t think this one was quite as captivating as The City of Brass, but I put that down to my fondness for first books and the shiny, magical newness that a new series has.

My final say on this is read it and if you haven’t gotten around to it, read the first one. I thought the first book worked particularly well in audio and had the benefit of pronouncing everyone’s names, tribes, and places correctly which was awesome. I read this in print format which was great as well, though I think it would have been even cooler in audio.