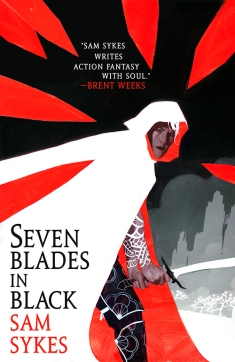 Series: The Grave of Empires #1

Sam Sykes returns with a new fantasy that introduces to an unforgettable outcast magician caught between two warring empires.

Among humans, none have power like mages. And among mages, none have will like Sal the Cacophony. Once revered, now vagrant, she walks a wasteland scarred by generations of magical warfare. The Scar, a land torn between powerful empires, is where rogue mages go to disappear, disgraced soldiers go to die and Sal went with a blade, a gun and a list of names she intended to use both on. But vengeance is a flame swift extinguished. Betrayed by those she trusted most, her magic torn from her and awaiting execution, Sal the Cacophony has one last tale to tell before they take her head. All she has left is her name, her story and the weapon she used to carved both.

Vengeance is its own reward.

If you’re looking for a fantasy vengeance story with a dash of Clint Eastwood thrown in, this might just be the book you’re looking for. This is a gritty world both literally and figuratively and the characters are a wild and dangerous bunch. I was intrigued by the synopsis, appalled by the cover, and remain curious about Sam Sykes’s other books so overall, I have a good impression.

Sal the Cacophony is a vagrant mage and bounty hunter. She takes on jobs that involve killing other vagrant mages hailing from the empire she used to call home and trust me, these are the most dangerous of jobs. Stripped of her magic and out for revenge, Sal totes her trusty sword named Jeff (not kidding) and the Cacophony, a massive and ancient gun with a mind of its own. Sal has a list of names, those who wronged her most directly, and she has her sights set on ridding the world of them at any cost… thus is the gist of this tale.

Sal is a mouthy, angry woman narrating the path that led her to be sitting in a cell at the very beginning of the story. You end up wondering things like, did she get her vengeance? Is she giving up? Is this where the story ends, with a firing squad?  Well, if I answered any of those it would spoil all the joy of reading a 600 page book. WORK YOUR WAY THROUGH THAT TOME AND GET THOSE ANSWERS! I liked Sal well enough, though her flaws were frustrating at times. Liette was a masterpiece and in my opinion her talents were a far sight more interesting than those of the traditional mages. Don’t get me wrong, the mages were pretty darn cool as well – the whole trade of power was an excellent touch, but this bookish yet tough woman makes excellent explosives and uses freaky healing potions made out of dead mage dust. WAYYYY COOLER. Did I mention the birds? Sal basically rides a dirty, furious, meat eating chocobo.

There is so much epic darkness from this book and I could see this working as a dark fantasy (with a dash of western) movie. Saloon doors slamming open, Sal stalking in with her luck scarf and the Cacophony whispering for blood at her hip…. Yeah I can see that working. Do yourself a favor and check this out.

4 thoughts on “Seven Blades in Black by Sam Sykes – Review”