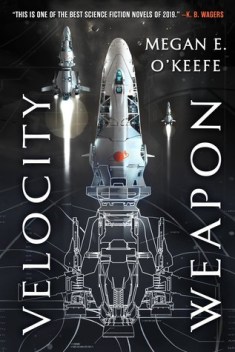 A copy of this book was provided by the publisher in exchange for and honest review.

Dazzling space battles, intergalactic politics, and rogue AI collide in Velocity Weapon, the first book in this epic space opera by award-winning author Megan O’Keefe.
Sanda and Biran were siblings destined for greatness. Her: a dedicated soldier with the skills to save the universe. Him: a savvy politician with ambitions for changing the course of intergalactic war.
However, on a routine maneuver, Sanda’s gunship gets blown out of the sky. Instead of finding herself in friendly hands, she awakens 230 years later upon an empty enemy smartship who calls himself Bero. The war is lost. The star system and everyone in it is dead. Ada Prime and its rival Icarion have wiped each other from the universe.
Now, separated by space and time, Sanda and Biran will find a way to put things right.

Velocity Weapon was such a surprise win for me! I wasn’t sure I would love it when I initially received it, but my hopes were high and, in this case, well placed. From the above synopsis you can see that this promises space battles, politics and rogue AI which is what intrigued me in the first place. Lemme just tell you, it had all that and then some of the BEST plot twists that I’ve encountered in a long while!

The characters were pretty darn cool as well. First of all, we’ve got Sanda who immediately gets blown up on her gunship but that’s definitely not the end of her. She shortly gets picked up by an enemy ship with no crew, just the AI named Bero who’s running it. Oh yeah, and she’s been floating in her pod for 230 years and everyone she knows and loves is dead. Next we’ve got Biran, Sanda’s younger brother, just entering the political field and trying everything he can to get someone to go check for survivors (mostly just Sanda). The split POVs and timelines makes for an interesting story and the reader gets little bits of information at a time. Biran’s POV fills in the past, detailing the perilous times after Sanda’s ship is destroyed by Icarion. There’s also a third POV featuring a character on a different planet and takes most of the book for it to become clear how she is relevant at all.

And then the plot twists guys… seriously, I did not see ANY of them coming until the moment it happened. I’m stunned and I won’t DARE spoil anything for you – you’ll just have to read it!! I literally gasped though, no exaggeration and I may have shouted at my husband, who will never understand why I was so flabbergasted.

Overall, Velocity Weapon was an absolute win in my opinion. It wasn’t perfect and I didn’t care for the third POV for most of the book because while it had it’s moments I just wasn’t connected to those characters at all. I think things will become more cohesive in future installments because it will (I think) be more relevant at that point. This was a fantastic book from the first chapter and I’d highly recommend it!