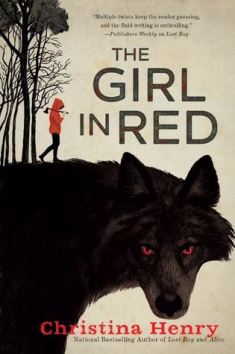 From the national bestselling author of Alice comes a postapocalyptic take on the perennial classic “Little Red Riding Hood”…about a woman who isn’t as defenseless as she seems.

It’s not safe for anyone alone in the woods. There are predators that come out at night: critters and coyotes, snakes and wolves. But the woman in the red jacket has no choice. Not since the Crisis came, decimated the population, and sent those who survived fleeing into quarantine camps that serve as breeding grounds for death, destruction, and disease. She is just a woman trying not to get killed in a world that doesn’t look anything like the one she grew up in, the one that was perfectly sane and normal and boring until three months ago.

There are worse threats in the woods than the things that stalk their prey at night. Sometimes, there are men. Men with dark desires, weak wills, and evil intents. Men in uniform with classified information, deadly secrets, and unforgiving orders. And sometimes, just sometimes, there’s something worse than all of the horrible people and vicious beasts combined.

Red doesn’t like to think of herself as a killer, but she isn’t about to let herself get eaten up just because she is a woman alone in the woods….

If The Road and Little Red Riding Hood had a love child, it would certainly be The Girl in Red by Christina Henry. This book is full of the darkness of The Road but without quite so much dire hopelessness and just a dash of fairytale inspiration.

Cordelia, who thinks her name is fusty and so goes by Red, is first introduced to us as she trudges through the woods to her grandmother’s house. It’s dangerous for a girl alone, and more so because she has a prosthetic leg that will slow her down if she needs to run. She’s a tough girl, knows her limitations, and generally expects the worst of the people she runs in to because the world’s really spiralled out of control since the Cough struck. Her family is gone now and she’s going to the only sanctuary she has left – her grandmother’s house hundreds of miles and many dangers away.

This was a compelling story, that evokes a unique sense of horror. I’m always thoroughly disturbed by stories of an apocalyptic nature and the fact that a mysterious pandemic could strike is not unreasonable. An element of government conspiracy gets thrown in for good measure and while surprising, wasn’t my favorite part. The story is told by alternating between past and present. Presently, Red is trudging through the woods, conserving food and strength. In the past we learn of her family and what happened to them leading up to the current moments.

I was suitably impressed by The Girl in Red and thus far I’m 2/2 for enjoying Christina Henry’s tales. This was a quick read that I finished over the course of a weekend and after I was done I definitely needed something a little lighter on the horror aspect. It was scary enough, though not so much that it kept me up at night or made me feel like I needed to ninja my shower curtain everytime I went into the bathroom.

3 thoughts on “The Girl in Red by Christina Henry – Review”