“Waiting On Wednesday” is a weekly meme originally hosted on Breaking the Spine but has since linked up with “Can’t Wait Wednesday” at Wishful Endings now that the original creator is unable to host it anymore. This is a great way to share upcoming released you’re excited about! 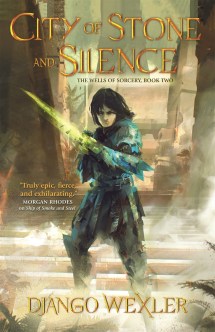 The first book in this series was WAY cool and I’m pretty excited to get my hands on the sequel, City of Stone and Silence. Django Wexler’s YA fantasy series is not so surprisingly better than your average young adult book, though it still had some of the classic tropes and I enjoyed it. There was some interesting world building going on in the first book and I hope it continues to be expanded in this and any other forthcoming installments. This will be released January 7, 2020.

One thought on “Waiting on Wednesday: City of Stone and Silence by Django Wexler”