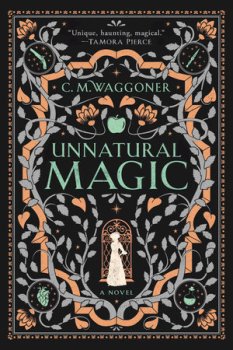 Onna can write the parameters of a spell faster than any of the young men in her village school. But despite her incredible abilities, she’s denied a place at the nation’s premier arcane academy. Undaunted, she sails to the bustling city-state of Hexos, hoping to find a place at a university where they don’t think there’s anything untoward about providing a woman with a magical education. But as soon as Onna arrives, she’s drawn into the mysterious murder of four trolls.

Tsira is a troll who never quite fit into her clan, despite being the leader’s daughter. She decides to strike out on her own and look for work in a human city, but on her way she stumbles upon the body of a half-dead human soldier in the snow. As she slowly nurses him back to health, an unlikely bond forms between them, one that is tested when an unknown mage makes an attempt on Tsira’s life. Soon, unbeknownst to each other, Onna and Tsira both begin devoting their considerable talents to finding out who is targeting trolls, before their homeland is torn apart…

Unnatural Magic was an unusual book that caught my eye with that lovely cover and the promise of a mystery. Honestly, I just can’t help myself with a little fantasy whodunnit – I ALWAYS request them. The mystery part of this was pretty good and the characters were certainly not your run-of-the-mill fantasy gals.

Onna Gebowa is a brilliant girl in what is still largely a male dominated area of study. In order to pursue her dreams of attending university and practicing magic, she sails off to Hexos. In short order she gets involved in the investigation of troll murders that have been happening around the city. Tsira is a troll who’s nearly been murdered several times and is determined to find out who is behind the crimes as well, as they’ve hit a little closer to home than is comfortable. Definite understatement there. Tsira is also quite a tough one, but her softer side shows through as she cares for Jeckran after she discovers him dying in the snow.

Both character POVs were equally interesting, though Tsira’s may edge out for the win. She and Jeckran got into much more interesting situations that Onna. I mean, Tsira was literally fighting six human men at a time for some cash and Jeckran just runs around shooting people (not literally). Absolutely fascinating! Theirs was the more action-packed while Onna’s POV dealt more with people and the society of Hexos. The world building is not particularly in depth, but it feels as if the whole world could be expanded so easily focusing on different characters in different cities. It feels lived in.

Overall, this was an unusual book that I don’t think will jive with everyone. It was interesting and has remarkably capable female characters that didn’t feel like a parody of Strong Female Character. I liked it. I liked the magic, the world, the weirdness of the troll societies, the hints at secret troll magic. I didn’t love it, but I was left thinking about it for days after finishing it. I wouldn’t hesitate to read another book from C.M. Waggoner and would love to see this world expanded upon!