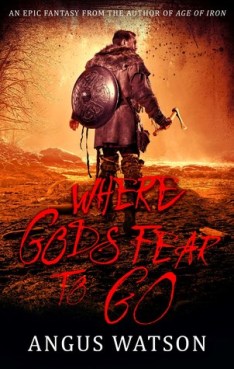 The outrageously thrilling West of West trilogy comes to an action-packed close in Where Gods Fear to Go –a gritty epic fantasy journey in which a mismatched group of refugees battle animals and monsters, an unforgiving land and each other as they cross a continent to fulfill a prophecy.

Battling across the Shining Mountains, the questers discover a land more terrifying than they ever could’ve imagined–and they’ve fought thunder lizards.
All the while fighting and falling in love, the tentatively allied Wootah and Calnians must survive monster attacks, flash floods, and tornadoes to uncover the secret of The Meadows. And then comes the hard part.
To save themselves and everybody else, they will travel west of west, deeper into danger…and attempt to take on a goddess who has already killed all the gods.

Ummm, I really didn’t think this trilogy could get any crazy but it certainly did! What began as an entertaining and hilarious story of a tribe running from certain death and the supernaturally enhanced warrior women hunting them down turned into something almost poignant. Okay, I wouldn’t go that far, but it was full of feeling, action, hilarity, and absurdity. In short, it was a darn good series that really took me by surprise and if you’re so inclined I would highly recommend the audiobooks because the narration makes it that much more on point.

Our unlikely cast of characters continue to find themselves in one predicament after another. They’ve just escaped the plains tribes but are now in the hands of the sasquatches who have mad telepathic powers that can debilitate even the most formidable warriors. This happens nearly first thing in the book, so I can safely tell you they escape and continue their journey to the far west, where they hope to defeat the warlock queen. There’s plenty of world building and further development of some characters that may have been somewhat flat (relatively speaking) up to this point.

It’s difficult to discuss specifically what I loved most about this book without providing spoilers for all three books. Rest assured, it was greatly enjoyable and I liked it much more than the second book, which I thought dragged a little bit through the plains tribe section. It was a SOLID and emotional finale and I legit teared up a little during a couple sections because despite all the ridiculousness, there’s a serious plot and characters you just can’t help but to love.