What does it mean if the gods can be killed? The first novel in an epic new fantasy series for readers of Brent Weeks, Brandon Sanderson, Peter V. Brett, and Scott Lynch. 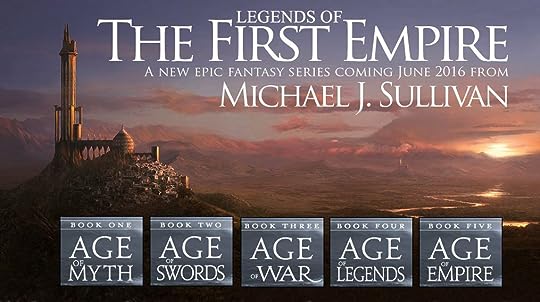 Since time immemorial, humans have worshipped the gods they call Fhrey, truly a race apart: invincible in battle, masters of magic, and seemingly immortal. But when a god falls to a human blade, the balance of power between men and those they thought were gods changes forever. Now, only a few stand between humankind and annihilation: Raithe, reluctant to embrace his destiny as the God Killer, Suri, a young seer burdened by signs of impending doom, and Persephone, who must overcome personal tragedy to lead her people. The Age of Myth is over; the time of rebellion has begun.

I was so very excited to hear that Michael J. Sullivan was writing a new series based on the rise of the first empire and doubly so when I got an early copy from Del Rey/NetGalley. Of course, I had to jump right in and see if it would be in the same league as his Riyria books. I was delighted to find that by the end, I was rather taken with these brand new characters.

Initially, I was slow to get truly engaged with the storyline, but once I found a quite spot to sit down and focus I zoomed right along. As I mentioned above, the story is set before the famed Novronian empire and details the relationships between the Fhrey, Rhune, and Dherg (elves, humans, and dwarves), though at this point the dwarves are only mentioned in passing. I thought it was really cool how some familiar locations like Avempartha, Drumindor, and Dahl Rhen (Dahlgren?) pop up. I had these huge nerd moments where I was like “I KNOW THAT PLACE!!!” and it was extremely satisfying to learn the origin of Avempartha.

The characters, while at first not as engaging as those from the Riyria books, were nonetheless fun to get to know. I greatly admired Persephone for her consistent nature and personal strength. While she had the opportunity to fade into obscurity and mourn her family, she chose instead to stand up and make the hard choices that the new leader of the village would not. Malcolm, a former slave to the Fhrey was an interesting character- funny at times, but quite a mystery at the end. He left me thinking that there is some large-scale conspiracy going on and I’ll be keeping my eye on him in upcoming novels. Shifty bugger. Raithe was a pretty decent fellow and I even liked some of the Fhrey, which have a vastly different role here than they do in the Riyria books. My favorites though were definitely Suri and Minna, I mean, how can you not like a strange, tattooed mystic girl with a wolf companion?

All in all, I think this will be a really great series and Age of Myth was a good start. I’m also glad to know that Age of Swords will be released in Summer 2017 and I won’t have to wait what feels like forever between installments because they’re all written already! (THANK YOU MJS!) For those who haven’t read either of the Riyria series, you can start here and not be overwhelmed or spoiled for the other series, but I really enjoyed starting with The Crown Tower.

8 thoughts on “Age of Myth by Michael J. Sullivan – Review”