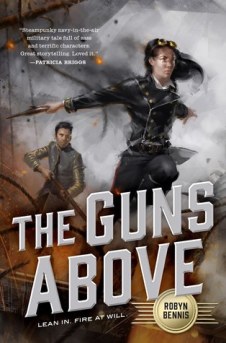 The nation of Garnia has been at war for as long as Auxiliary Lieutenant Josette Dupris can remember – this time against neighboring Vinzhalia. Garnia’s Air Signal Corp stands out as the favored martial child of the King. But though it’s co-ed, women on-board are only allowed “auxiliary” crew positions and are banned from combat. In extenuating circumstances, Josette saves her airship in the heat of battle. She is rewarded with the Mistral, becoming Garnia’s first female captain.

She wants the job – just not the political flak attached. On top of patrolling the front lines, she must also contend with a crew who doubts her expertise, a new airship that is an untested deathtrap, and the foppish aristocrat Lord Bernat – a gambler and shameless flirt with the military know-how of a thimble. He’s also been assigned to her ship to catalog her every moment of weakness and indecision. When the Vins make an unprecedented military move that could turn the tide of the war, can Josette deal with Bernat, rally her crew, and survive long enough to prove herself to the top brass?

The Guns Above is the debut novel of Robyn Bennis and somehow I didn’t know about it until Tor emailed me about a review! Such a large volume of SFF books are released every year that I always miss an astounding number of good books. I’m glad I didn’t miss out on this sort of Napoleonic-war era steampunk fantasy!

The characters were what really made this book stand out. Josette Dupre is the first female airship captain in Garnian history and as such, she’s under enormous pressure to succeed. Lord Bernat is under orders from his uncle General Fieran to make certain that Dupre looks like a failure in the public eye, no matter how successful she is. The two are at odds from the very beginning – Josette would truly like to throw Bernat overboard, but ballast is valuable and not to be wasted even if it does cause trouble. Bernat’s (or Bernie) observations of Josette’s decisions are slanderously inaccurate I found myself affronted on her behalf for the first quarter of the novel. Eventually things settle down between the two and Bernie is a crack shot with a rifle, which makes him useful as more than just ballast.

The plot is also quite good, though without the quality characters and dry humour, I think it would have felt a little stale. The Garnians are in the midst of a war with a neighboring kingdom and the airships are a valuable commodity. Dupre’s ship Mistral is a new design and as the crew runs it through the standard battery of tests, they end up on the front lines of the second front of the war (which isn’t supposed to happen). Enemy engagement, terrifying aerial maneuvers, and a few subplots keep things interesting for much of the book.

Overall, this was good debut and I hope the rest of the series (however long that may be) will be equally good, if not better. I didn’t feel a strong connection to the characters until the latter part of the book which was somewhat disappointing, but by the end I was cheering for the Mistral and her crew. I think the improvement in characterization and story pacing as the book progressed speaks to the potential Robyn Bennis has as a writer and The Guns Above was a debut to be proud of.

4 thoughts on “The Guns Above by Robyn Bennis – Review”